On the location of a typical old Flemish farmstead, in the middle of the beautiful rural area of Flanders, where fields are lined with willow and poplar trees, the client wanted to create a new home for himself and his family.
The particularity of the site was its traditional location, with its concealed driveway off a rural road running behind the old orchard and directly connected to the fields behind. The new private houses built around the site had resulted in an enclosed feeling, with hardly any view to the beautiful landscape behind. The danger was that unconsidered urban planning would demand that a new building should follow the same building zones close to the road. However, this standard solution would have ignored the essential character of the old farmhouse, so it would not relate to the typical urban grain of settlements in predominantly rural areas. Furthermore this solution would create more visual obstruction in the rural landscape for the people passing by, and allow the project to be dictated by the neighbouring houses, rather than the surrounding fields and views.
The solution combined respect for the existing rural fabric while also reaching an understanding with the urban planners, retaining the essential qualities of the site and allowing the project to blend into its surroundings.

Considering the farmhouse typology and rural tradition, the internal spaces are never open plan yet are directly connected with doors and hallways. They are always functional and never aesthetic in conception, not featuring such modern concepts as large fully glazed facades, for example.
In consultation with the client was decided to respect these traditional aspects, and to create an organizational concept in which spaces are connected and related with regard to their function and their orientation on the site. This defined the plan, governing the volumetric and the circulation concept both internally and in in relation to the exterior. Maximizing the views across the stunning landscape led to a defined positioning of the windows, which were relatively small, and in keeping with the size of the door openings.
The result is a fragmented volumetrical approach – referring to the functional extensions typical of farms, where over the years volumes are added as needed. This was given a contemporary treatment with a modernist roof rather than the gable roof typical of rural buildings in the area.
The material is ‘kalei’ brickwork, with rough bricks typical of the area, and this defined the look and feel of the house and worked in harmony with the interior materiality of the project. On the inside the materials are of a utilitarian nature, sober and contemporary at the same time. Use of wood and concrete flooring create a tranquil atmosphere, together with the warm white plastered finish of the walls, as in a typical farmstead. The relatively brutalist and functional interior has the effect of retaining the focus on the green outside. 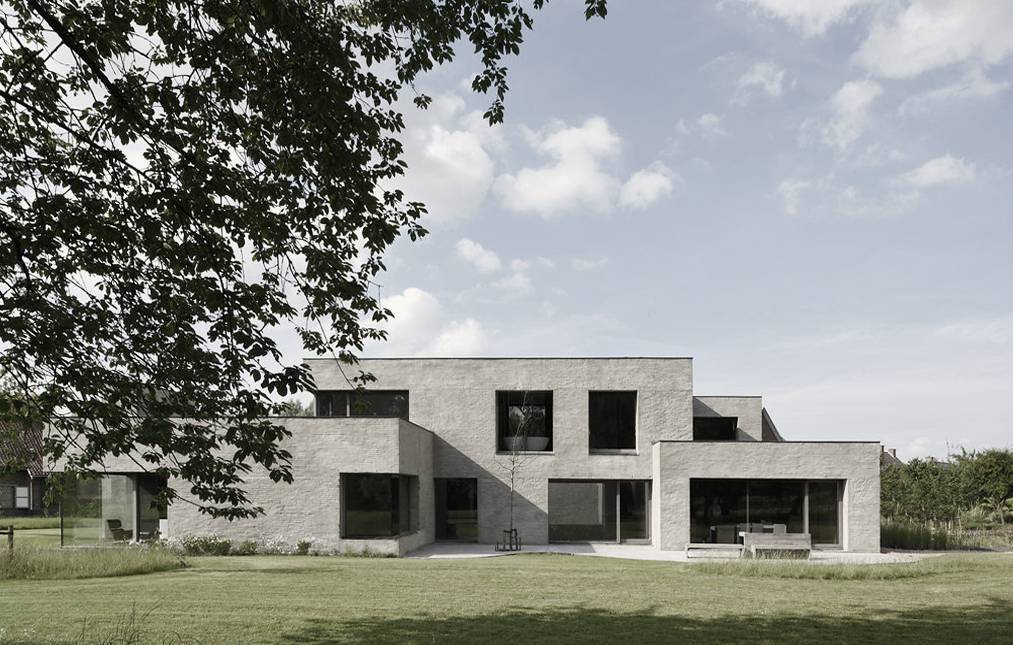 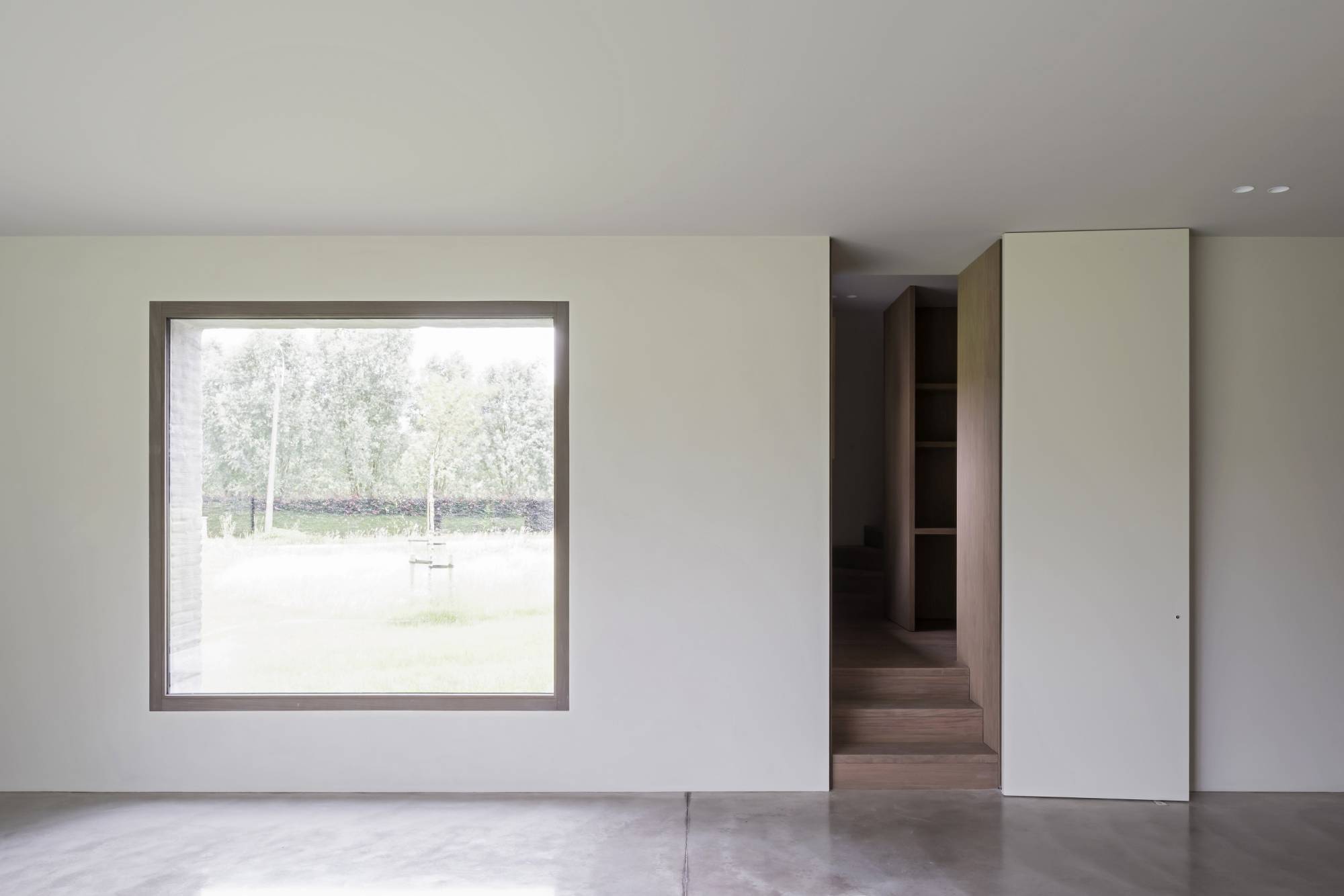 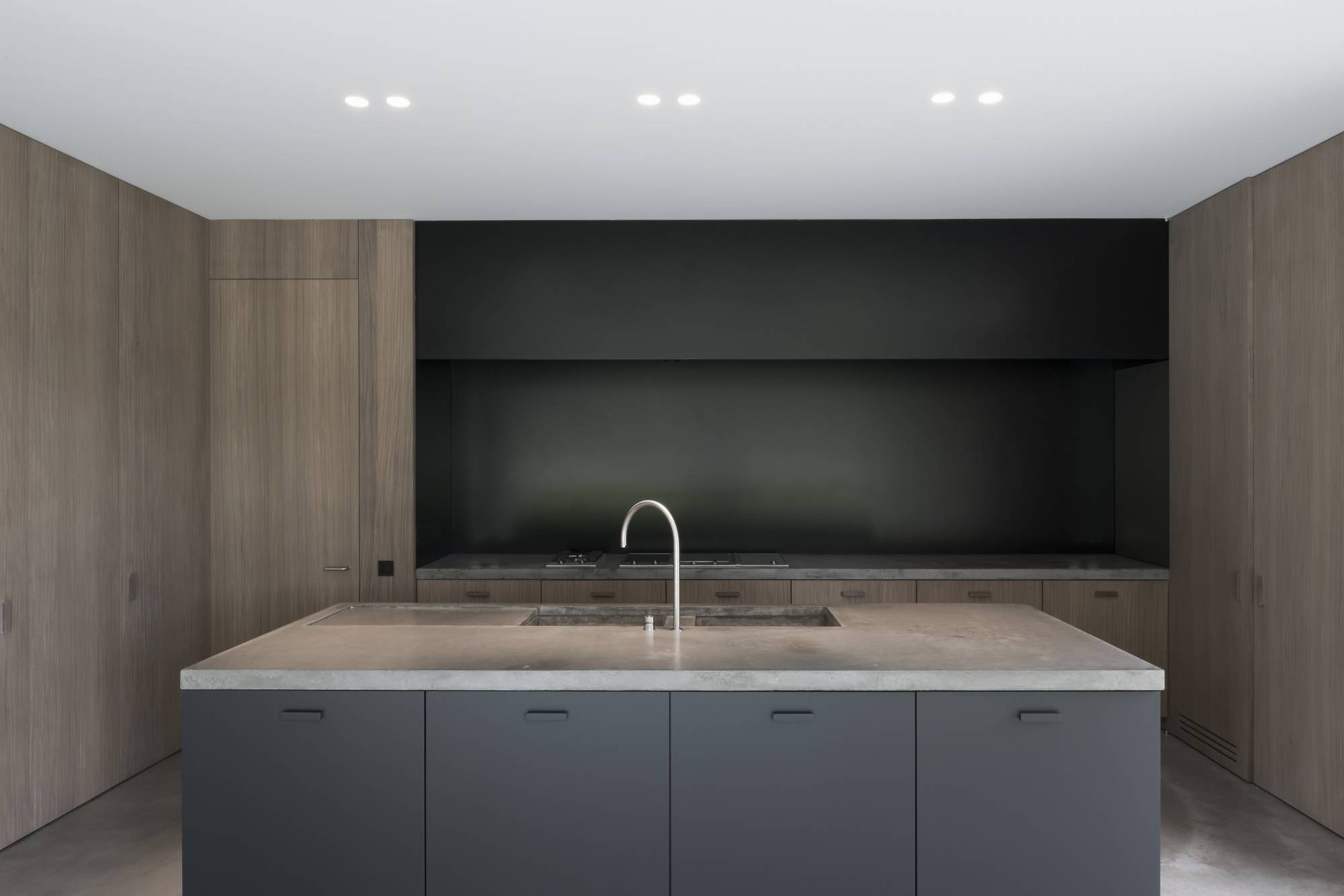 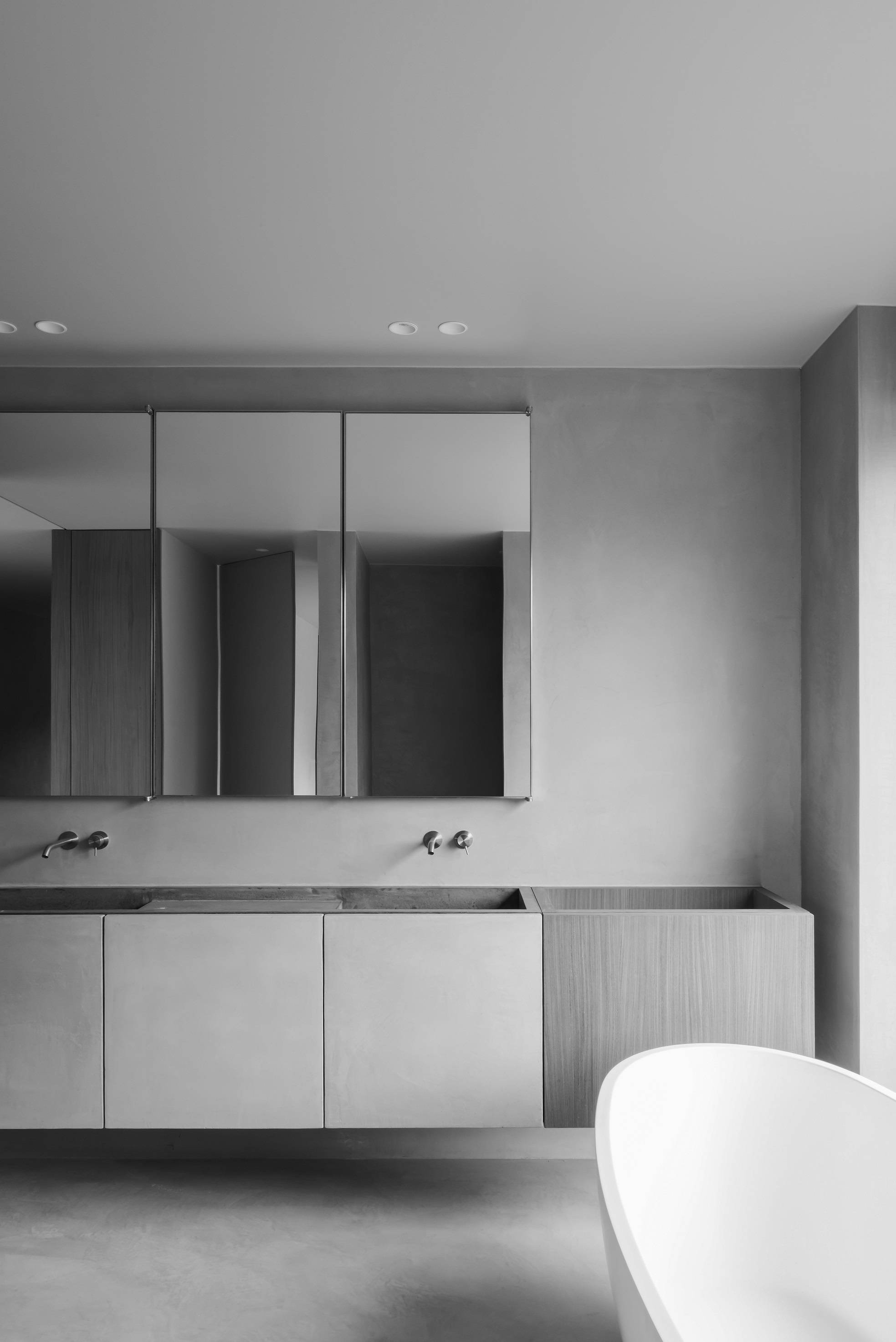 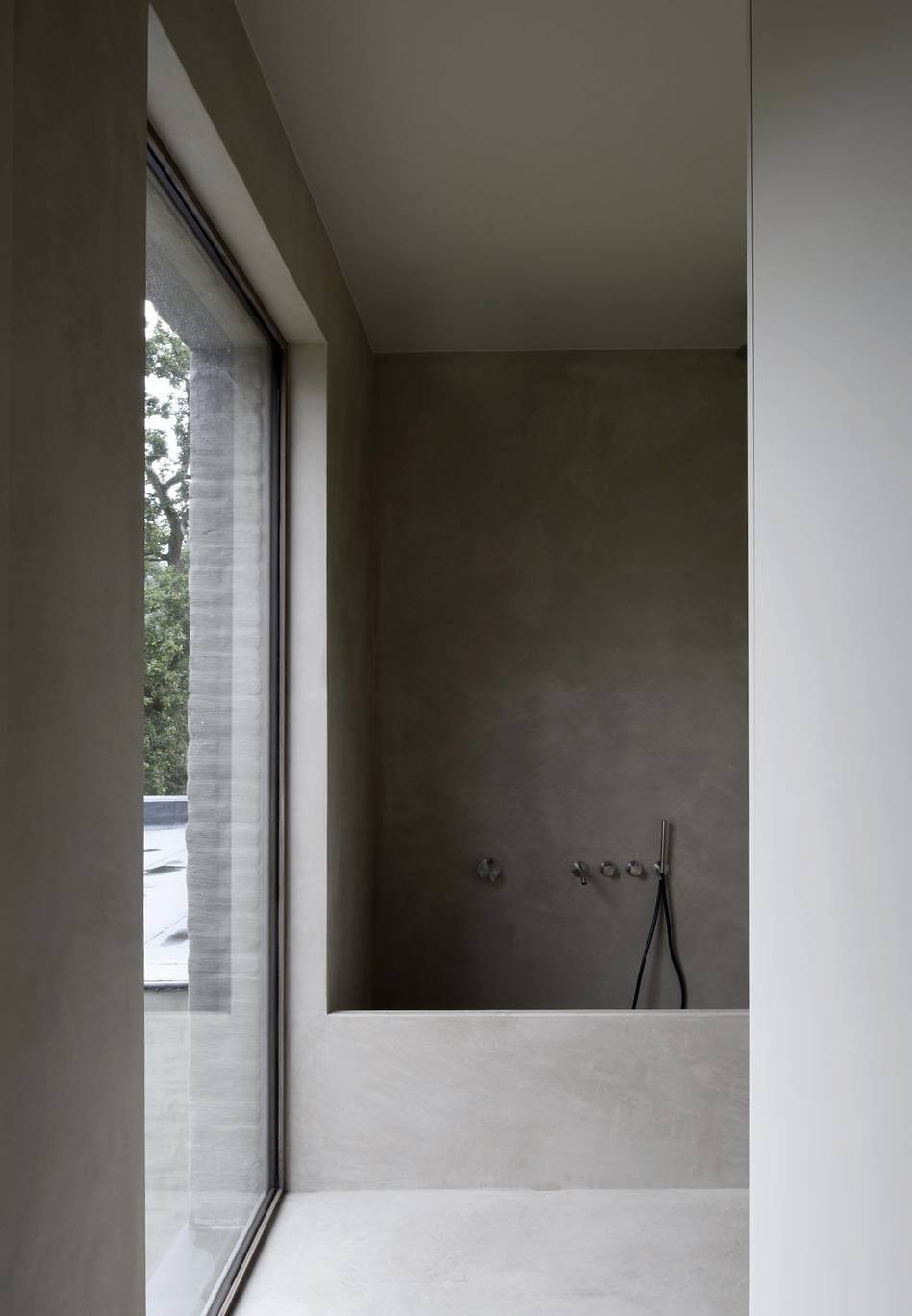 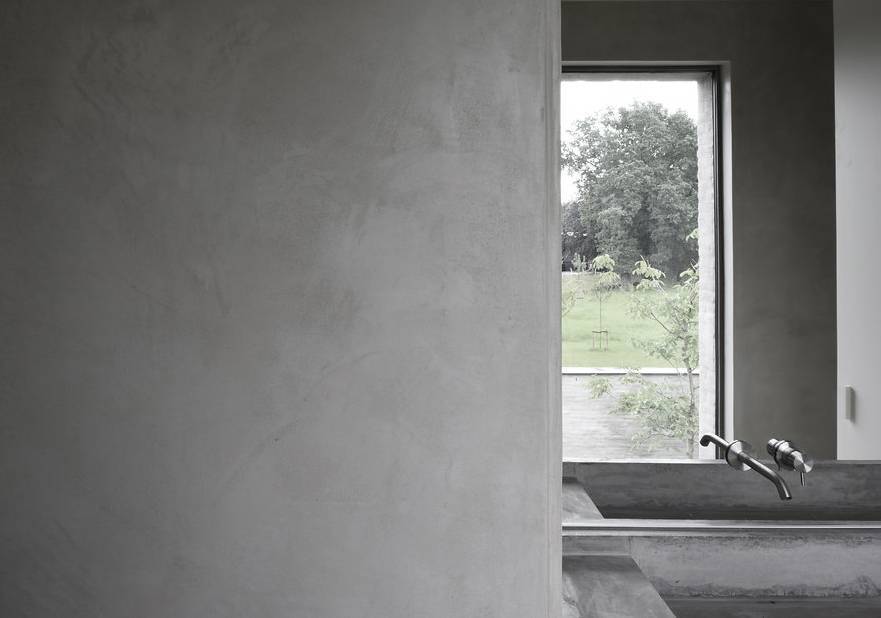 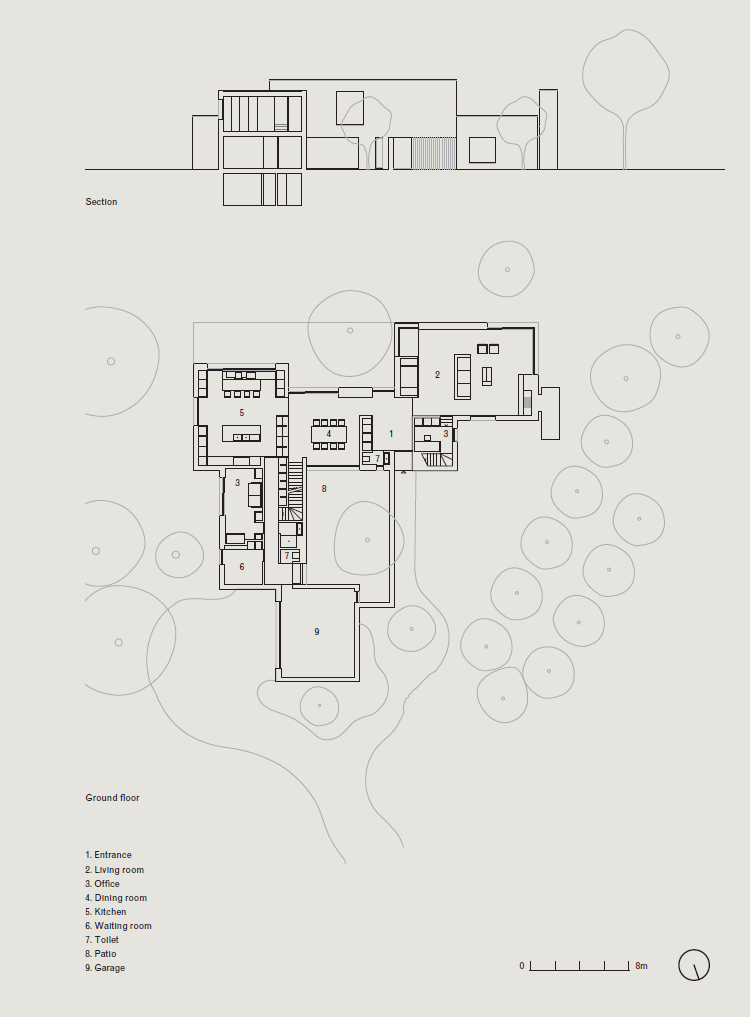