On reclaimed land close to the sea, with views delineated by an urban coastline, a limited number of trees, shrubs and centrally sited farm buildings define the spatial organization. The brief was to replace existing structures with a contemporary farming business, stables and surrounding orchard.
By implementing three elongated black-slatted wooden volumes in the existing open landscape, with a dramatic courtyard in between, the archetypal farmyard was created. The house, stables and barn create a clear border around the courtyard – the heart of the farm – but the open side permits a connectedness to the surrounding meadows. The courtyard is also enlivened by a water feature – centred between the house and the stables – and at the other end its flat character is interrupted by a 60-metre retaining wall that catches the small undulation in topography and terminates in an integrated cesspit.
The basic volumes are of a utilitarian barn typology where openings – to be closed by large sliding gates – are kept to a functional minimum.

A thorough approach with regard to detailing and materials strengthens the contemporary character of this project. The design omits any ornament on the façade – gutters, drains and ridgelines are abstracted to the point that they are almost invisible. Making reference to old wooden barns, the repetitive timber motif merges sills and eaves and extends on to the roof, whereas the farmhouse is granted larger openings for views out to the landscape and courtyard, and is distinguished from the other volumes by its large chimney flues.
From a distance the abstraction of the three wooden volumes is complete – but coming closer to the project, more and more details become visible. One might say the architecture is designed ‘at the scale of furniture’. The abstract formal language of the façade is poetic in its refined detailing and, in the sunlight, the diaphanous rhythm of the slatwork is further emphasized.

The initial concept proposed a discreet volumetric analysis of elongated and staggered structures to mark a clearly enclosed yard and inner area. The long, low typology of farm buildings and barns is found nearby in the ‘polder farms’ (farms located on floodplains) of Flanders in Belgium, as well as in the Netherlands. Because of the utilitarian nature of the brief – ‘this is a farm’ – no visual distinction was made between home, stables and barn. For the functional aspects of the brief, the classic eaved roof form of the farm building has been elongated to create large, utilitarian sheds.The use of materials also follows the barn typology, but has been distilled. The storage rooms and stables of a farm are often clad in wooden planks, both in Belgium and abroad. Wood is a natural and sustainable farmyard material that immediately references the rural character and forms the basis of the project. Here all façade work, exterior cabinetry and other visible parts of the buildings are resolutely clad in black-stained wood, supported by a polished concrete base. This second material again emphasizes the utilitarian nature of the farm and is used as a continuous floor surface both inside and out. As well as lending the building a contemporary character, the black-stained wood contributes strongly to the sustainability and longevity of the built form. The palette of soft grey and anthracite is tempered by the surroundings – the green of the trees, shrubs and meadows. The green of the landscape also mingles with the exterior hard surfaces and defined planting that permeates the concrete strips in strategic places. 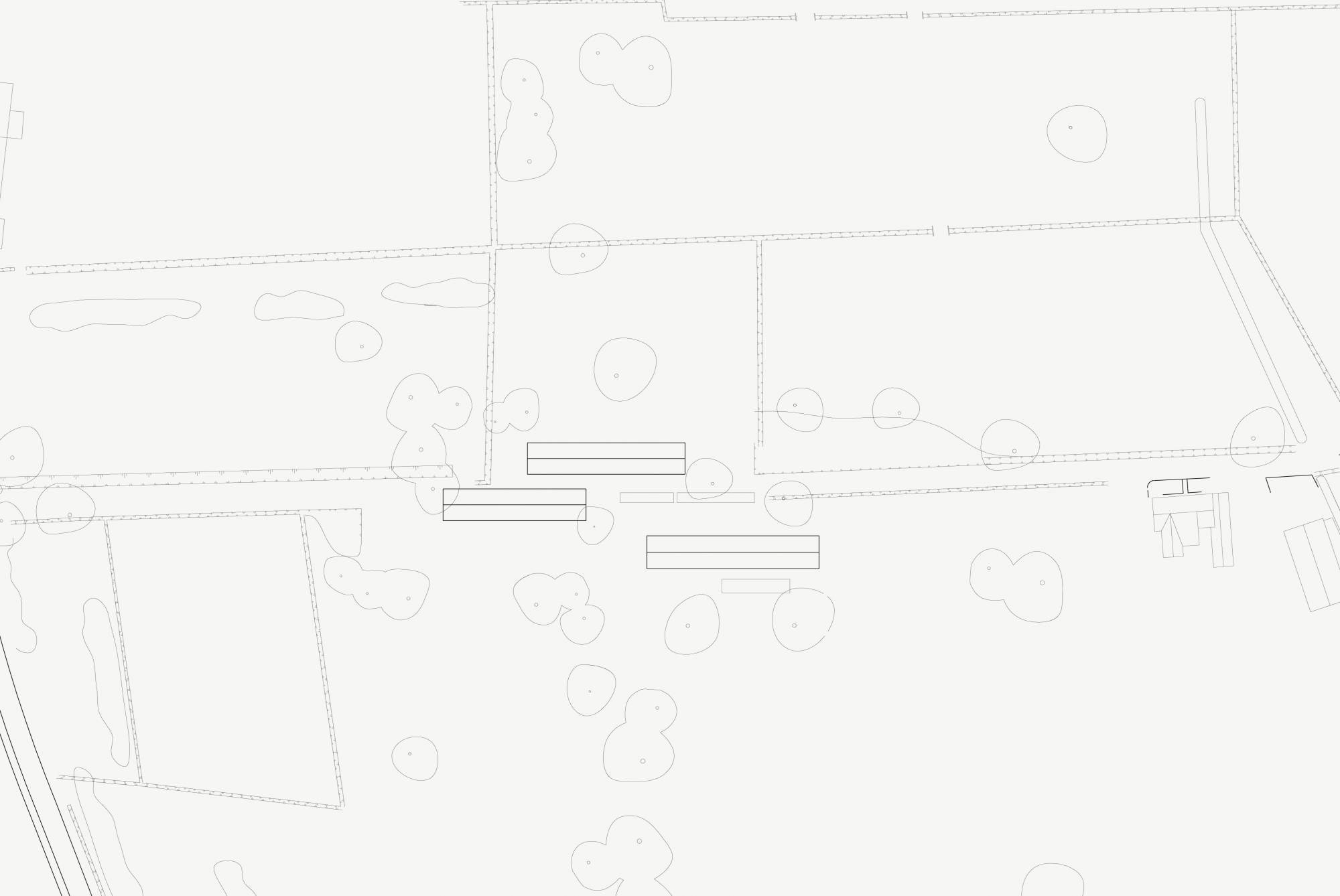 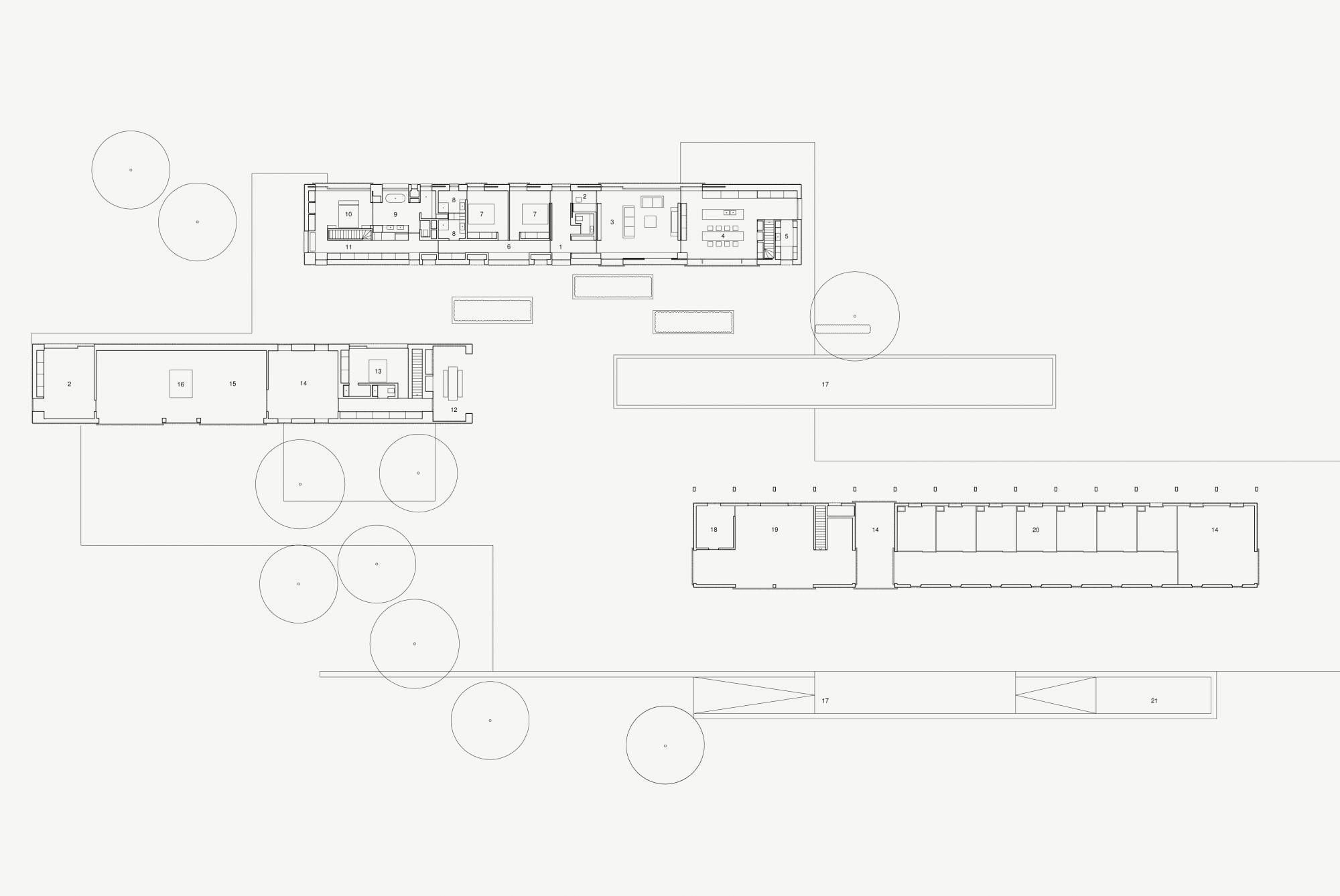 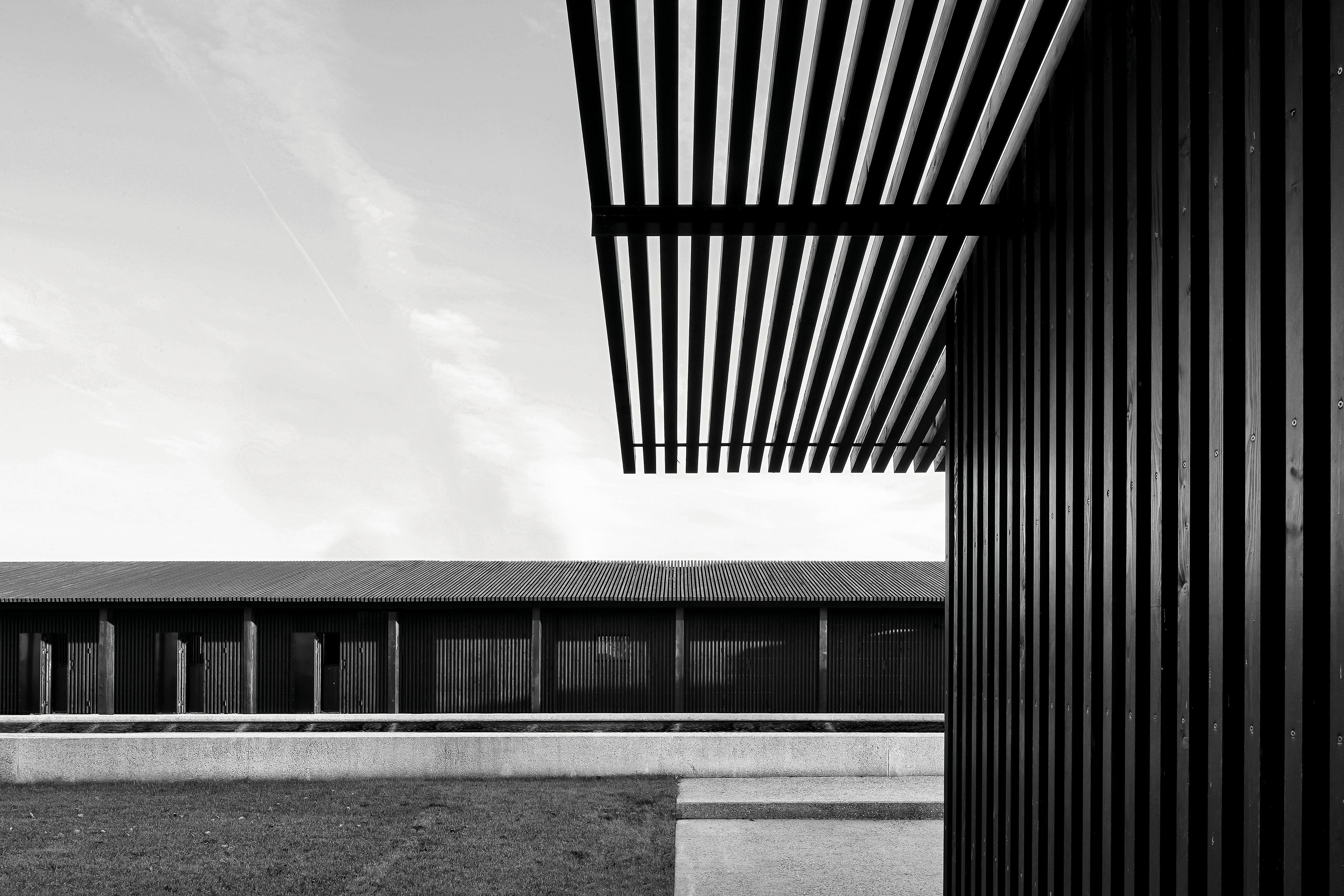 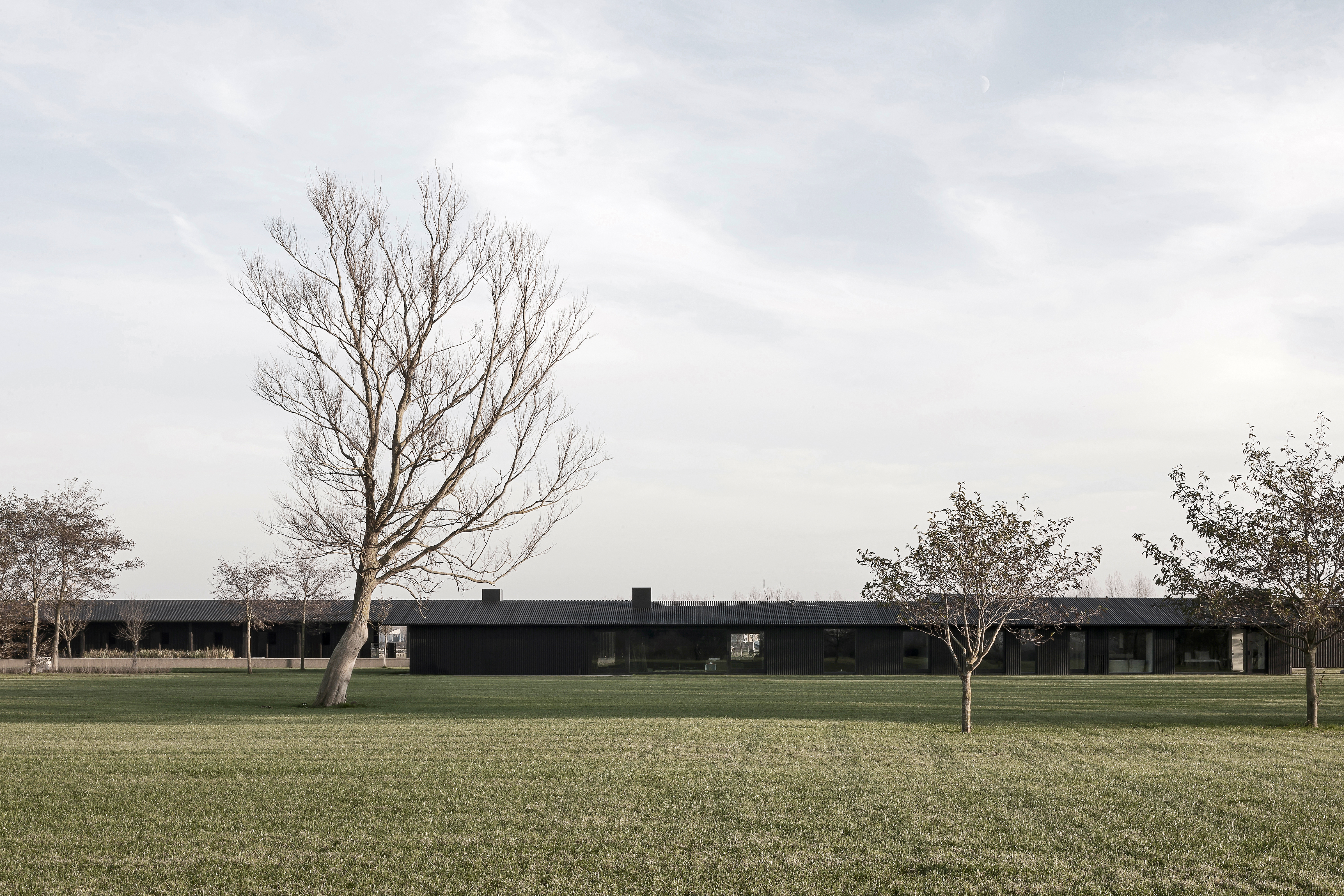 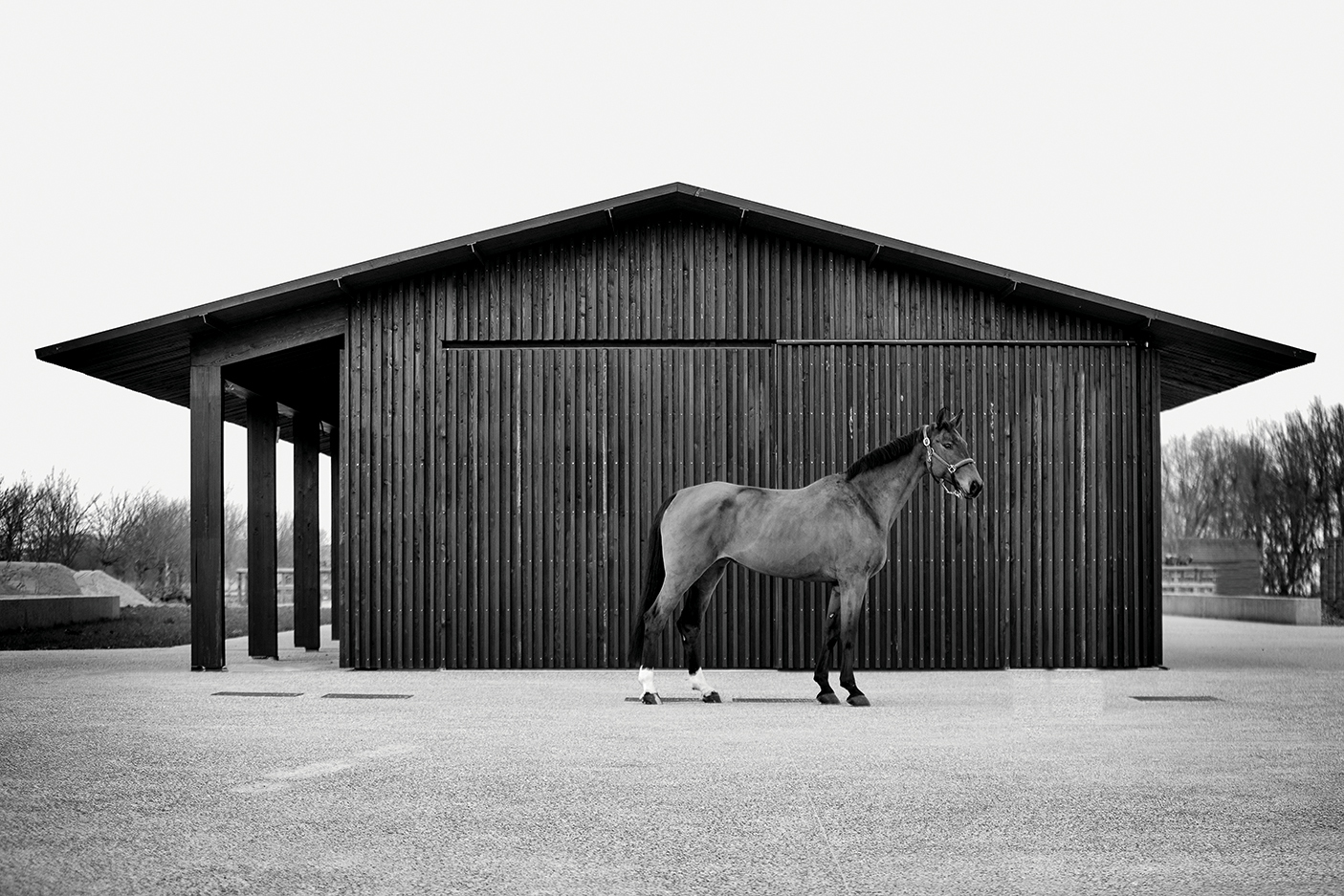 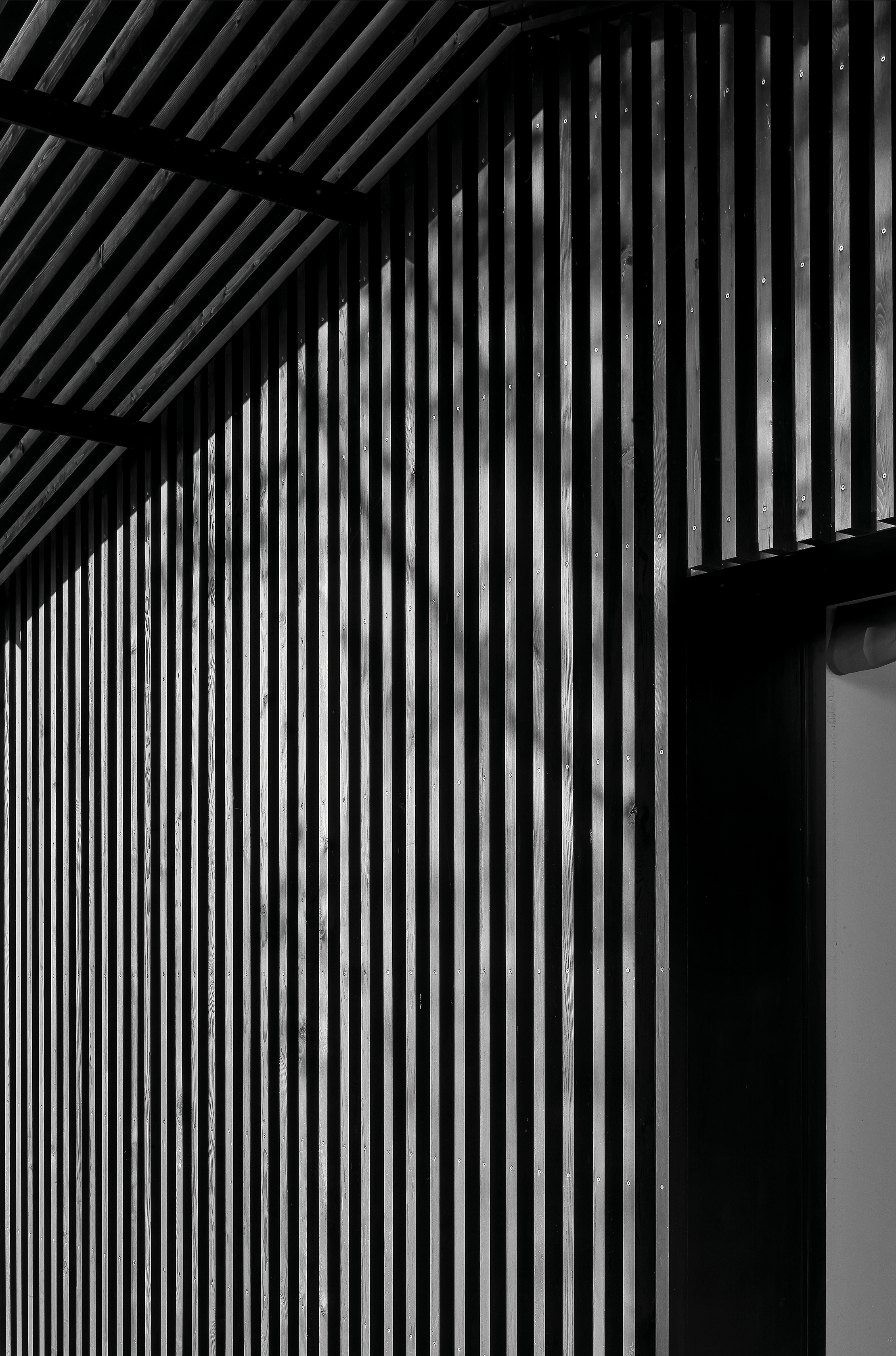