Since the early 16th century the urban square called ‘Graanmarkt’, located in the historic centre of Antwerp, has been a well-known marketplace where a wide range of fresh and authentic products are sold. Enclosed by a series of noble, classical houses and the beautiful Bourla theatre, this square was the perfect setting for a multifunctional project aiming to reflect the origin of the Graanmarkt by housing a concept store and gallery, a restaurant and a hotel-serviced apartment
Graanmarkt 13, with only its neoclassical façade retained, appears to be a home from the outside: with a typical white-painted façade, three floors, coach doors and no merchandised window displays, it evokes nothing more than a period house from the 18th century. The refurbishment of the building retained a homely, quiet atmosphere throughout the whole project.
The front façade was well preserved, and the authenticity of the interior was defined through using refined, classical materials. In this way the architectural qualities of the building were respected, while at the same time in the interior, more raw, tactile and sustainable elements such as wood, metal, hammered glass and concrete were introduced. The lighting throughout is entirely custom made and designed in cooperation with PS Lab.
The rear façade was radically stripped down, new floor levels were inserted and, most importantly, a grand staircase in exposed concrete created a new vertical connection between floors. The influx of natural light through large windows works with the sensual materiality of the interior spaces to create a calm and open environment.
The restaurant in the basement – already one of Antwerp’s most renowned culinary retreats – is a conceptual ‘extension of the marketplace’, where acclaimed chef Seppe Nobels serves courses with herbs and vegetables home-grown on the roof terrace behind. The dining space looks out on to a small courtyard with its lone ginkgo tree soaring towards the floors above. The design aimed to bring the garden square into the space, making it a focal point of the building. This was achieved by placing benches, similar to those outside, green bistro chairs and the flower lamps around the two structural pillars. The resulting space is a dynamic, poetic expression; the architecture remains very contemplative.

On the ground floor there is a concept store for high-end fashion, accessories and furniture. Custom-designed matt-black fixtures contrast with the bone-textured plaster walls. A circular fitting room draped in heavy linen is visible upon entry and this adds another textural layer to the space. The first-floor gallery is used for exhibitions and events.
The upper levels feature an apartment – originally a home for the owners, now a luxurious apartment. The open-plan top floor, organized around the fireplace, combines a seating corner, open kitchen and dining area. The living room with a row of panoramic windows looks onto the large terrace with views of treetops and the city. From the rooftop terrace behind, the Graanmarkt marketplace can be seen below. 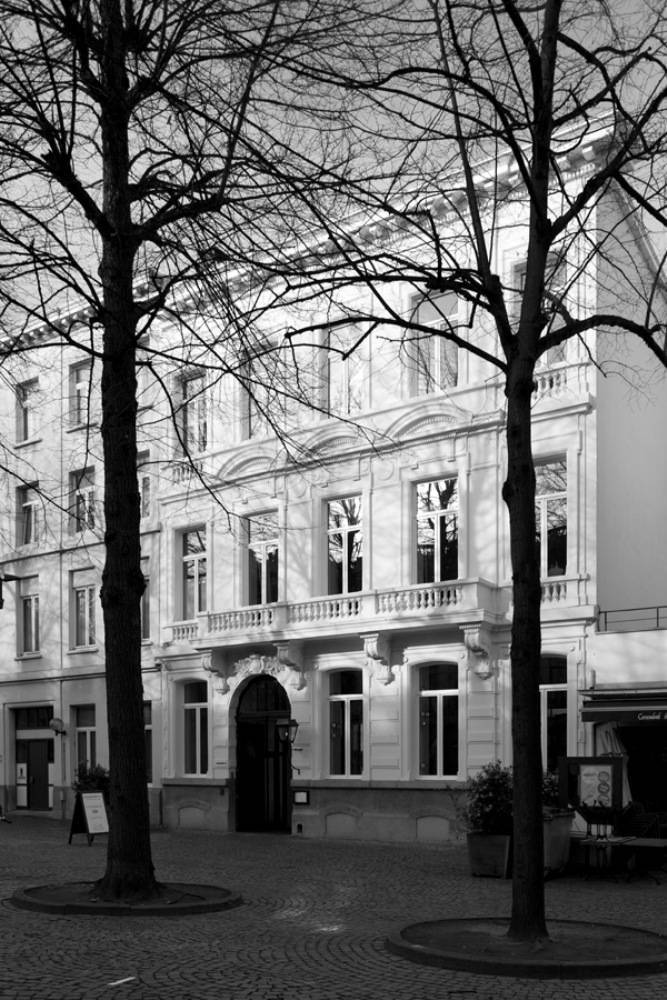 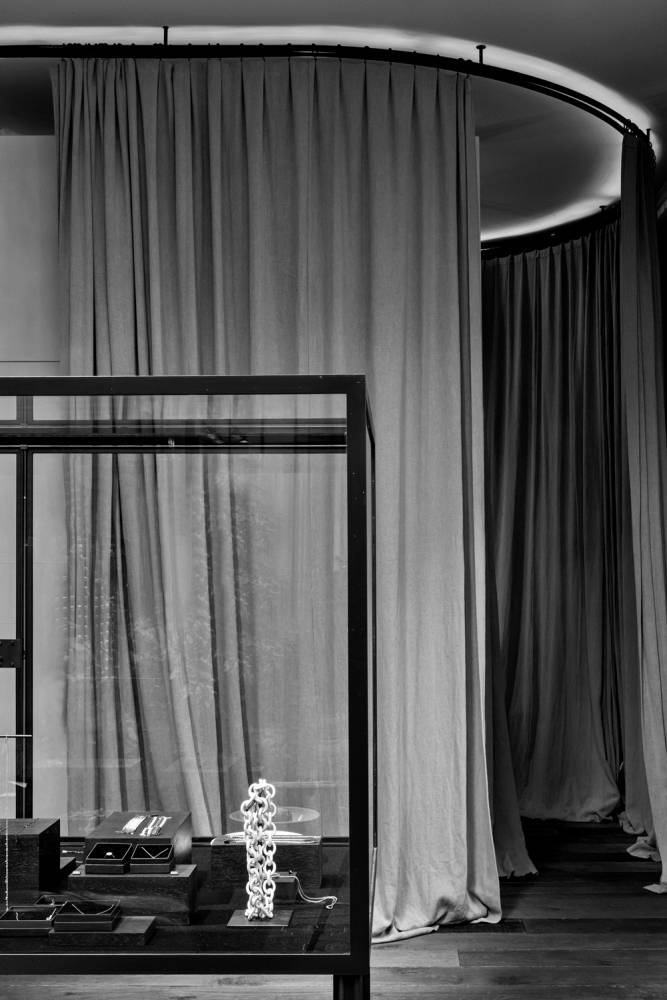 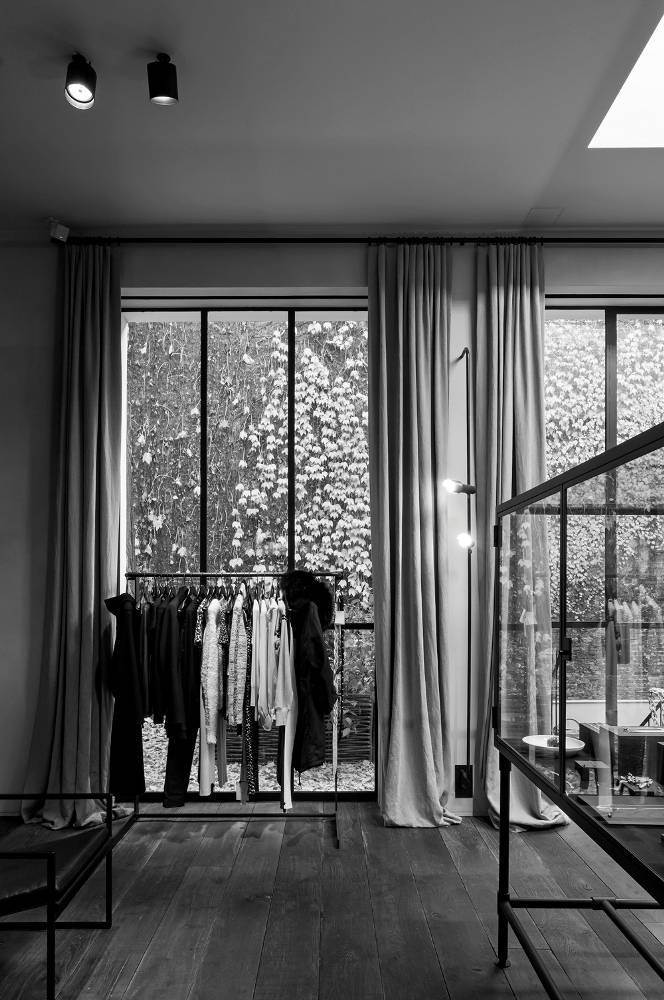 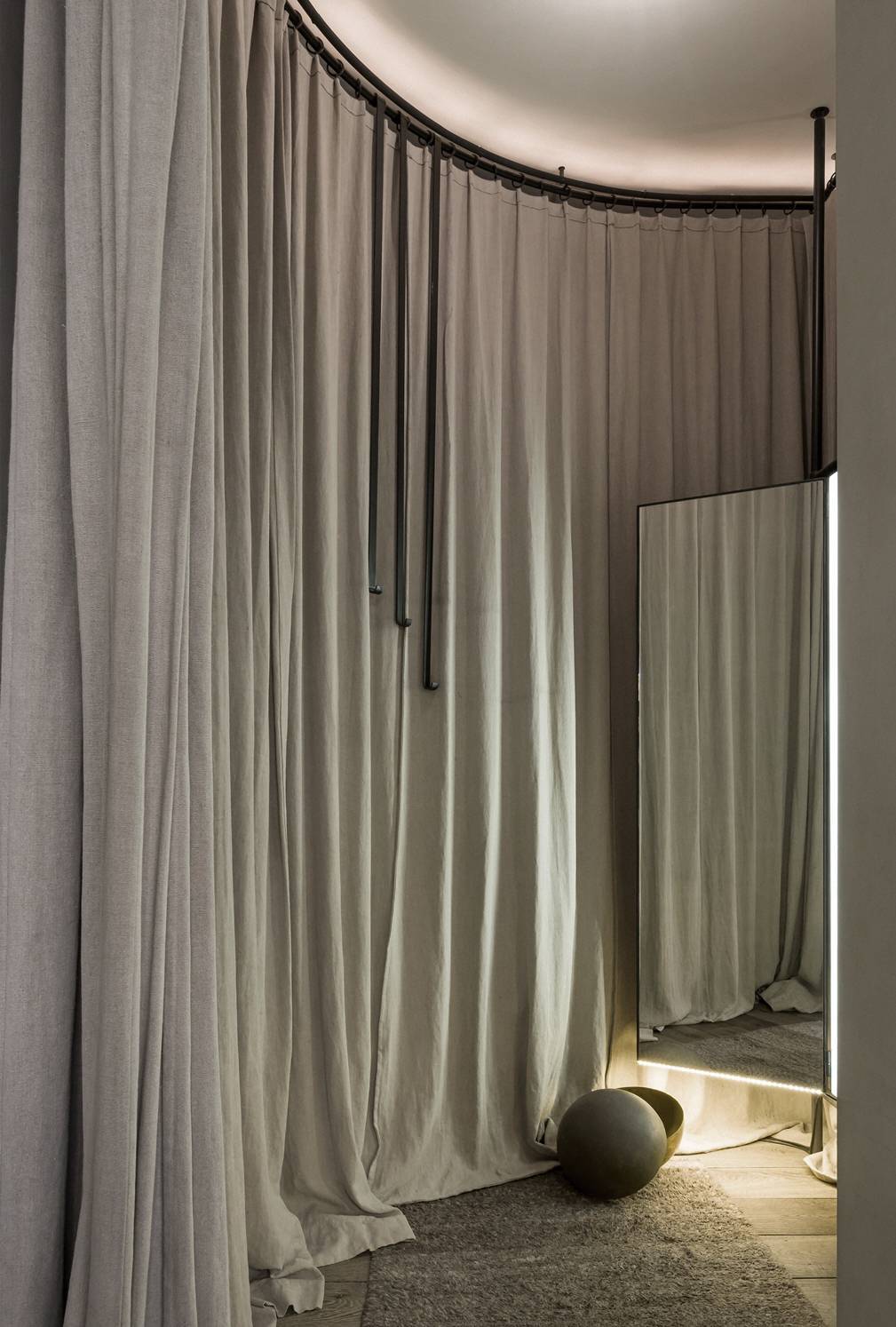 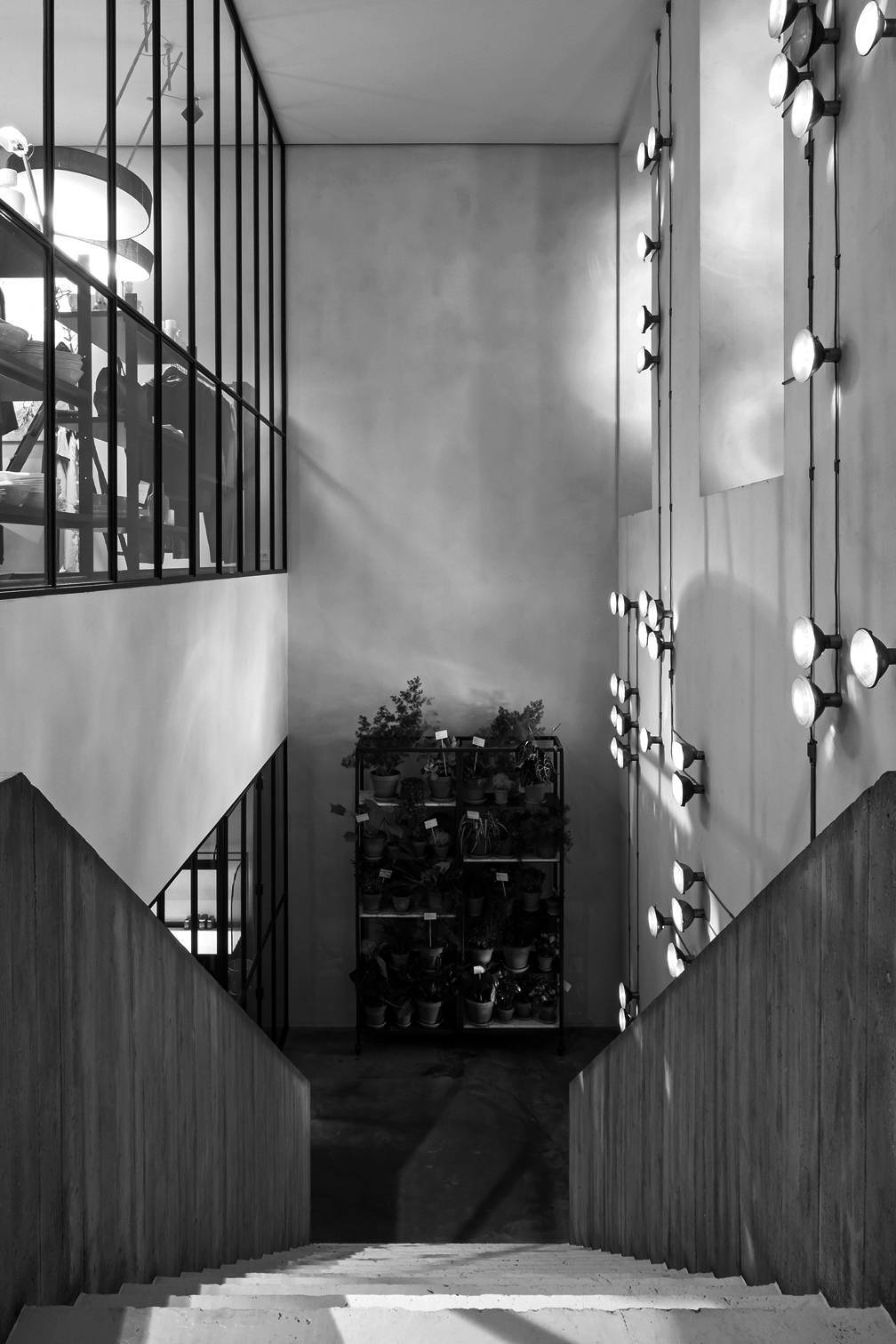 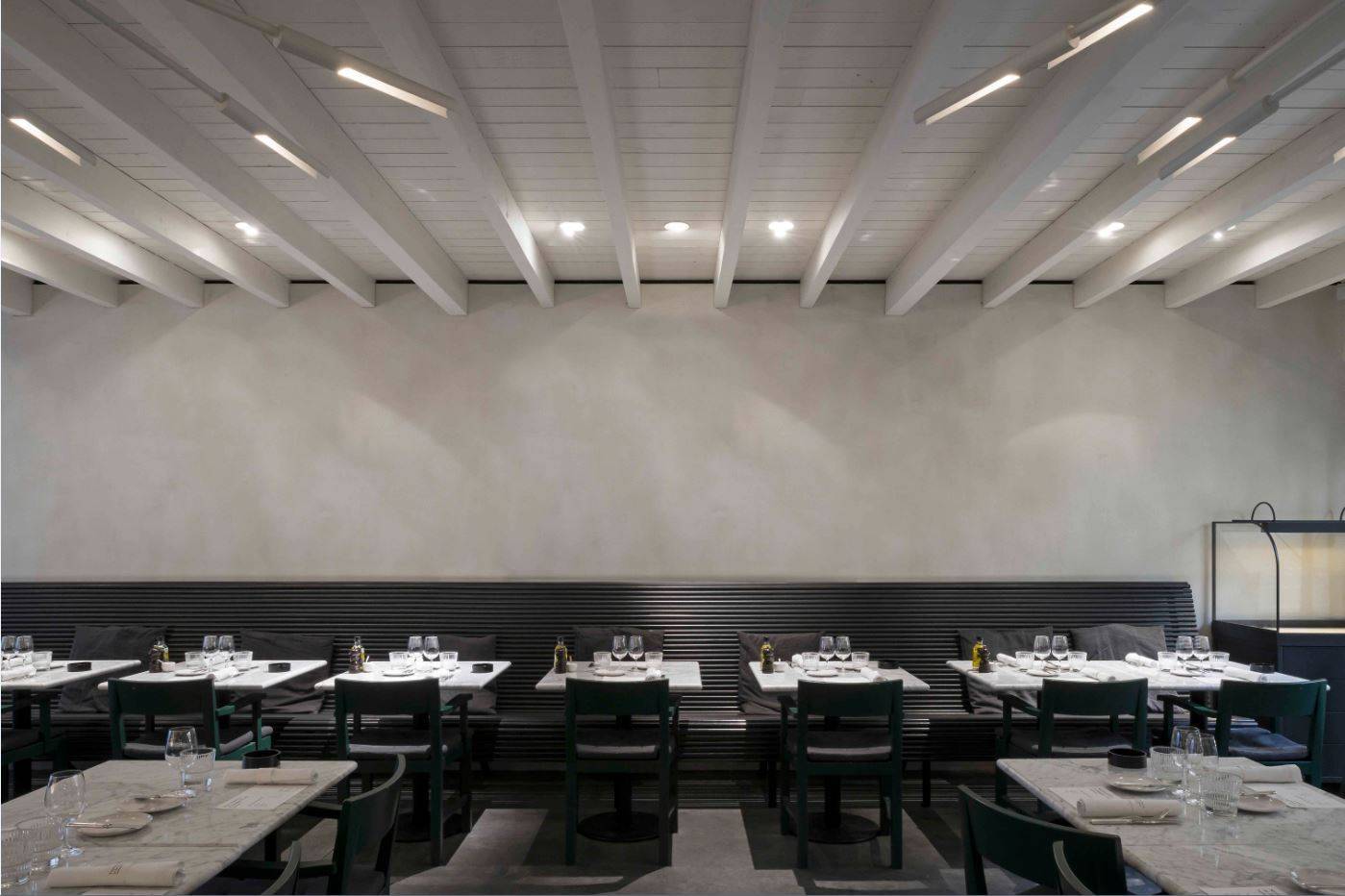 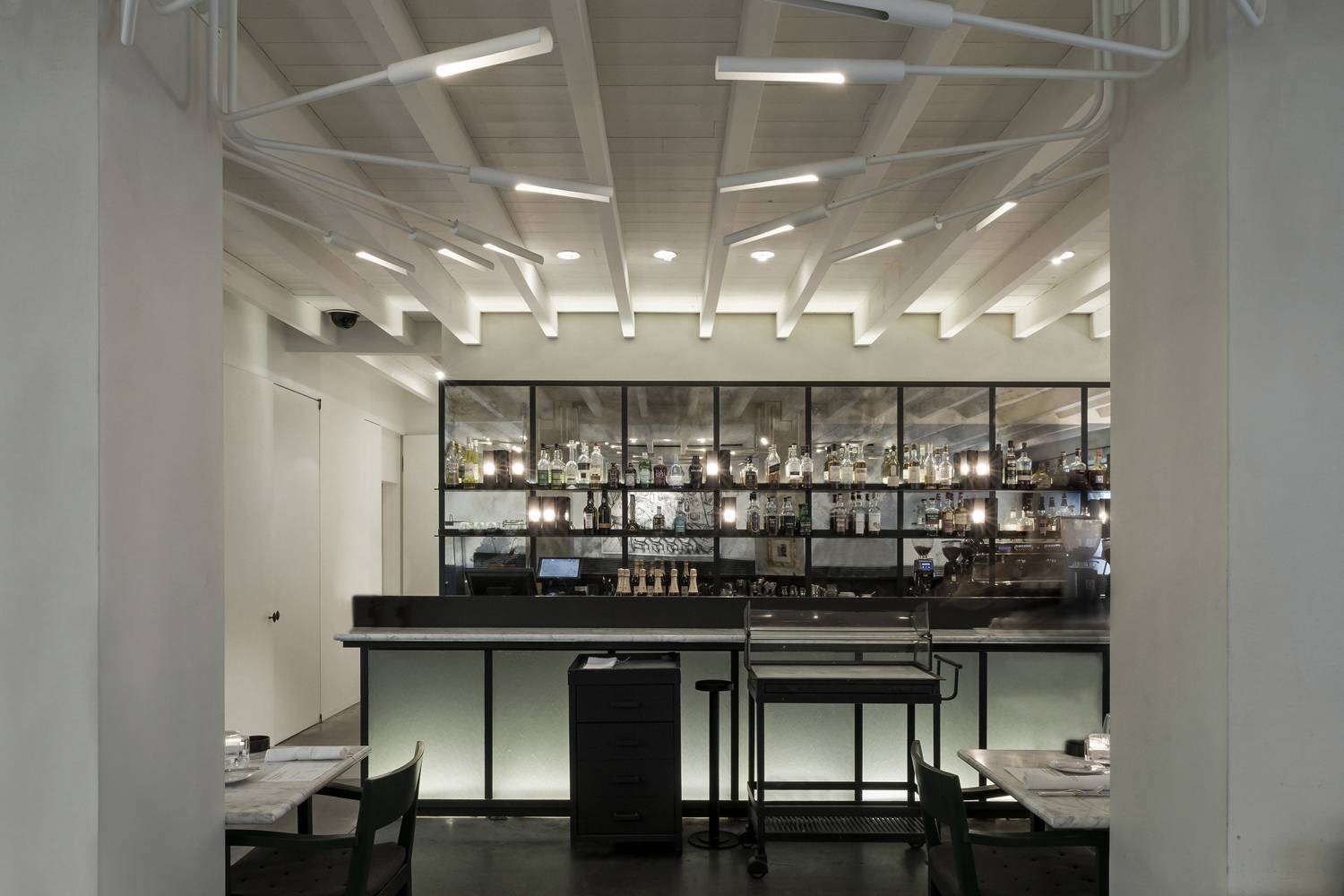 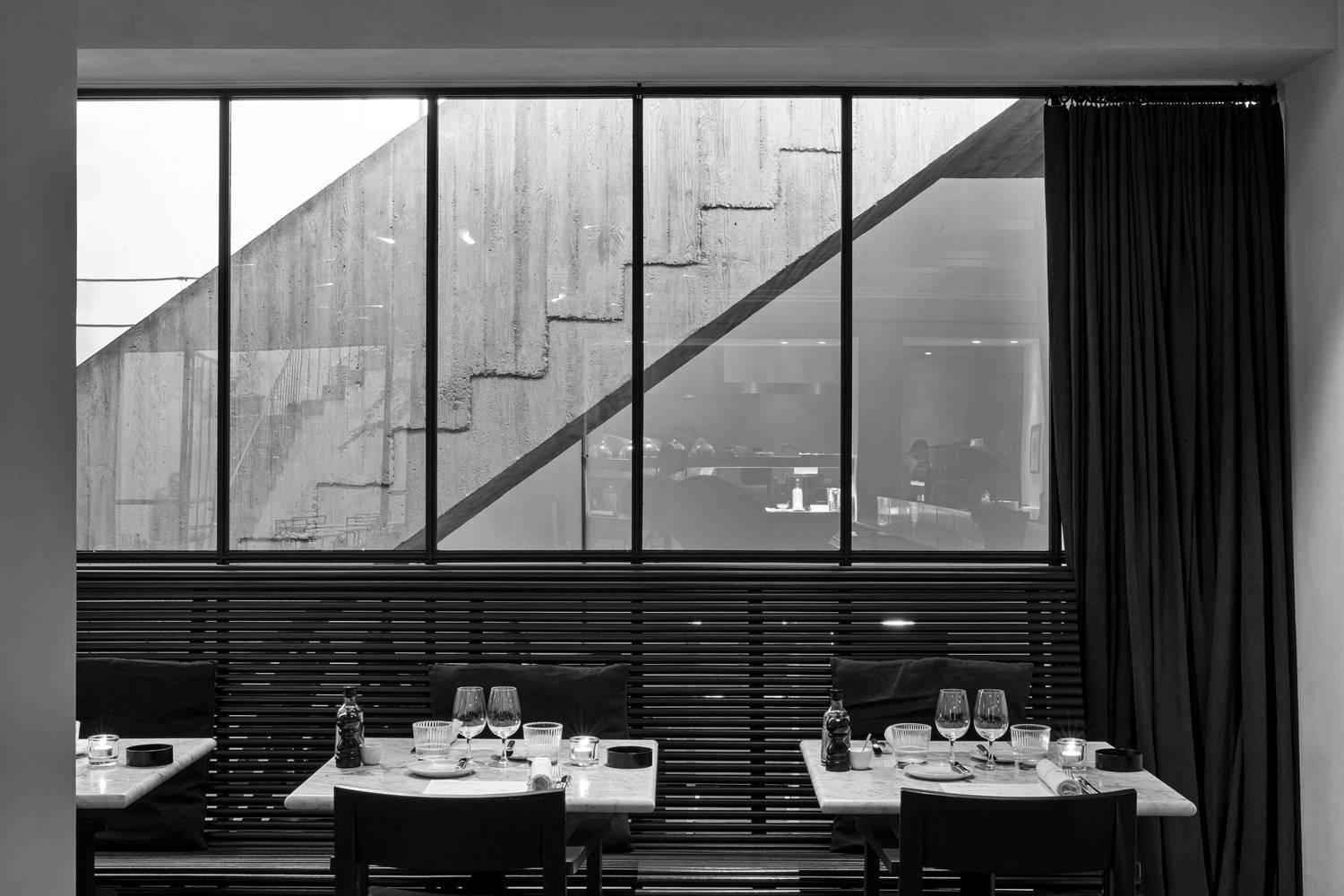 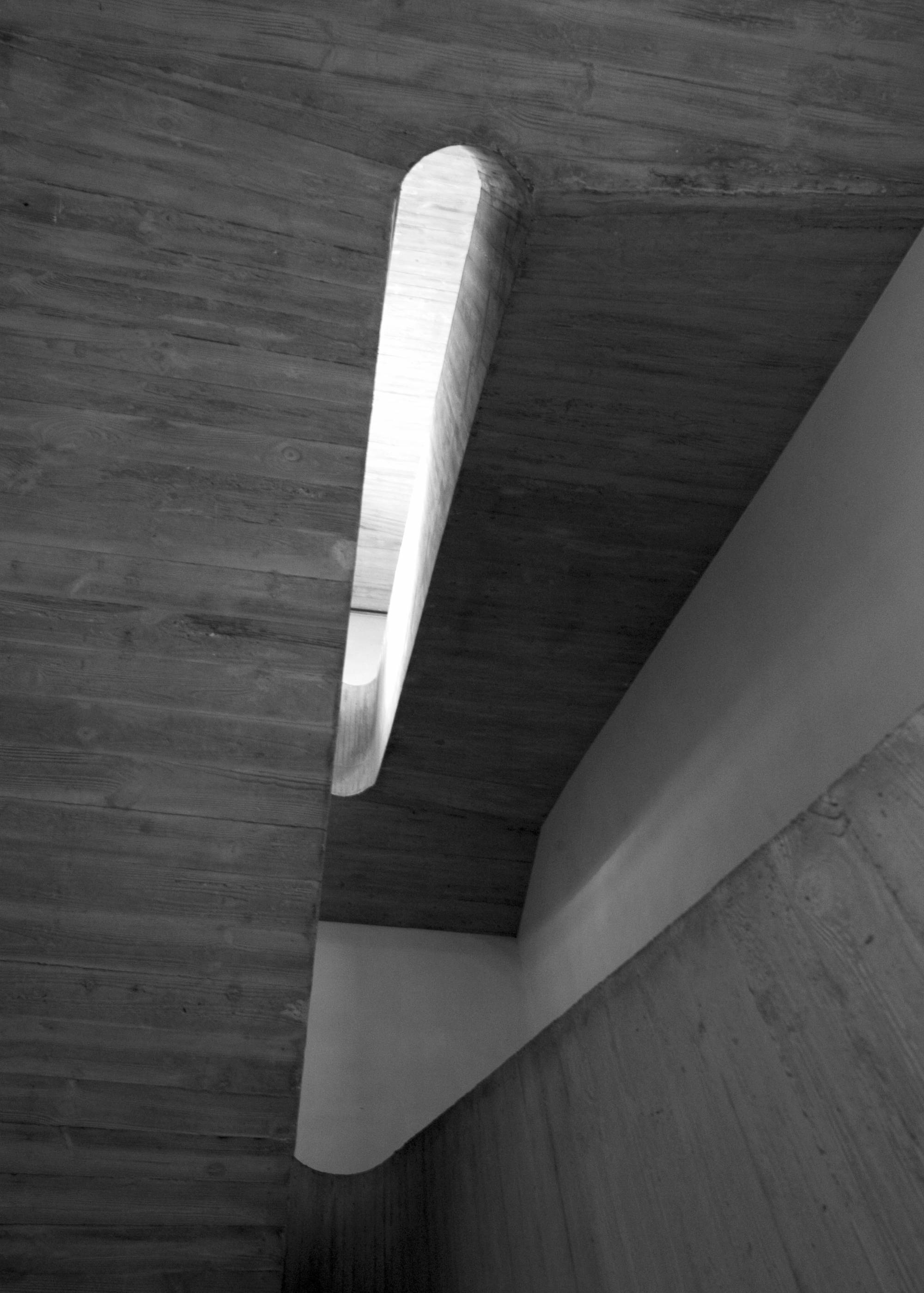 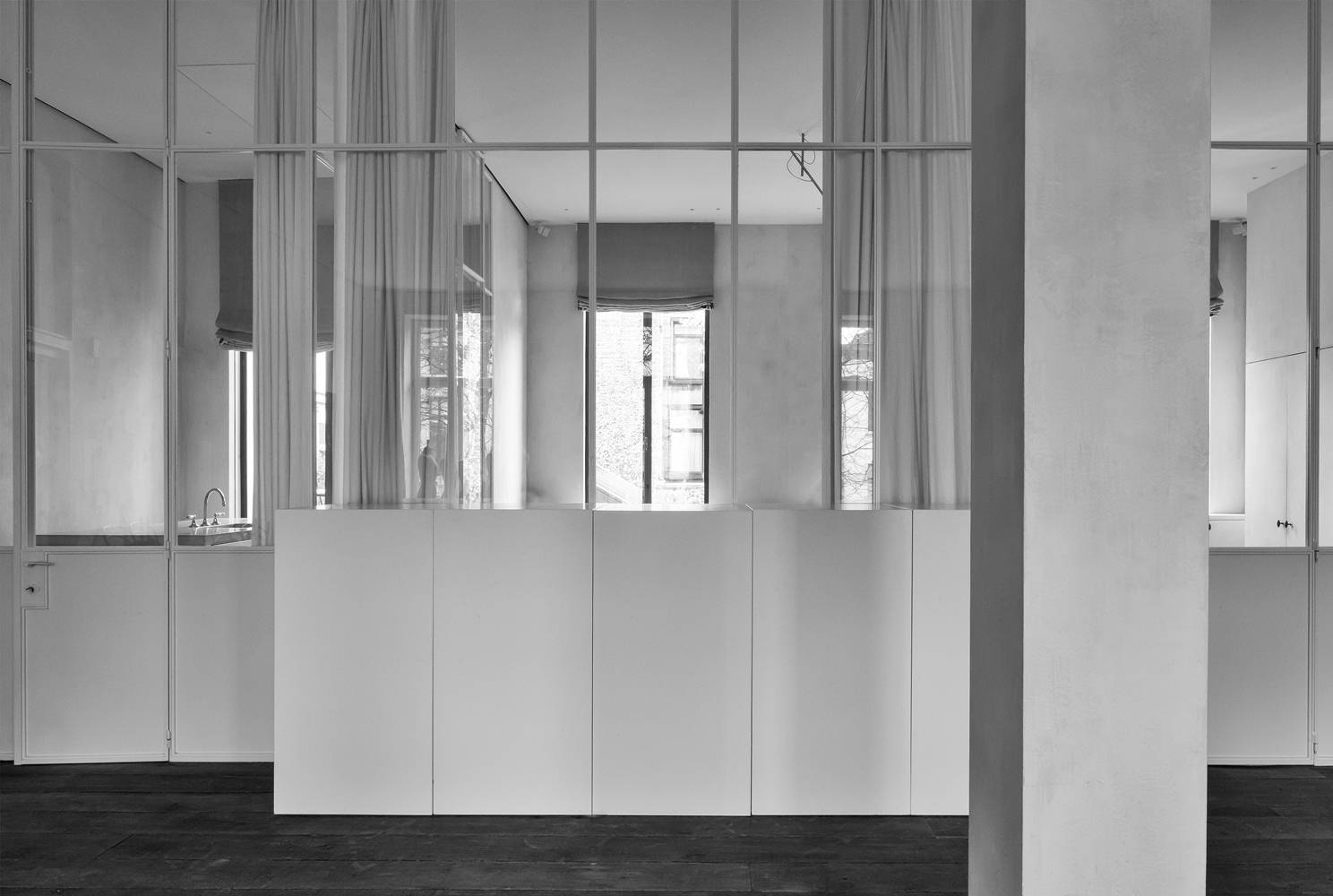 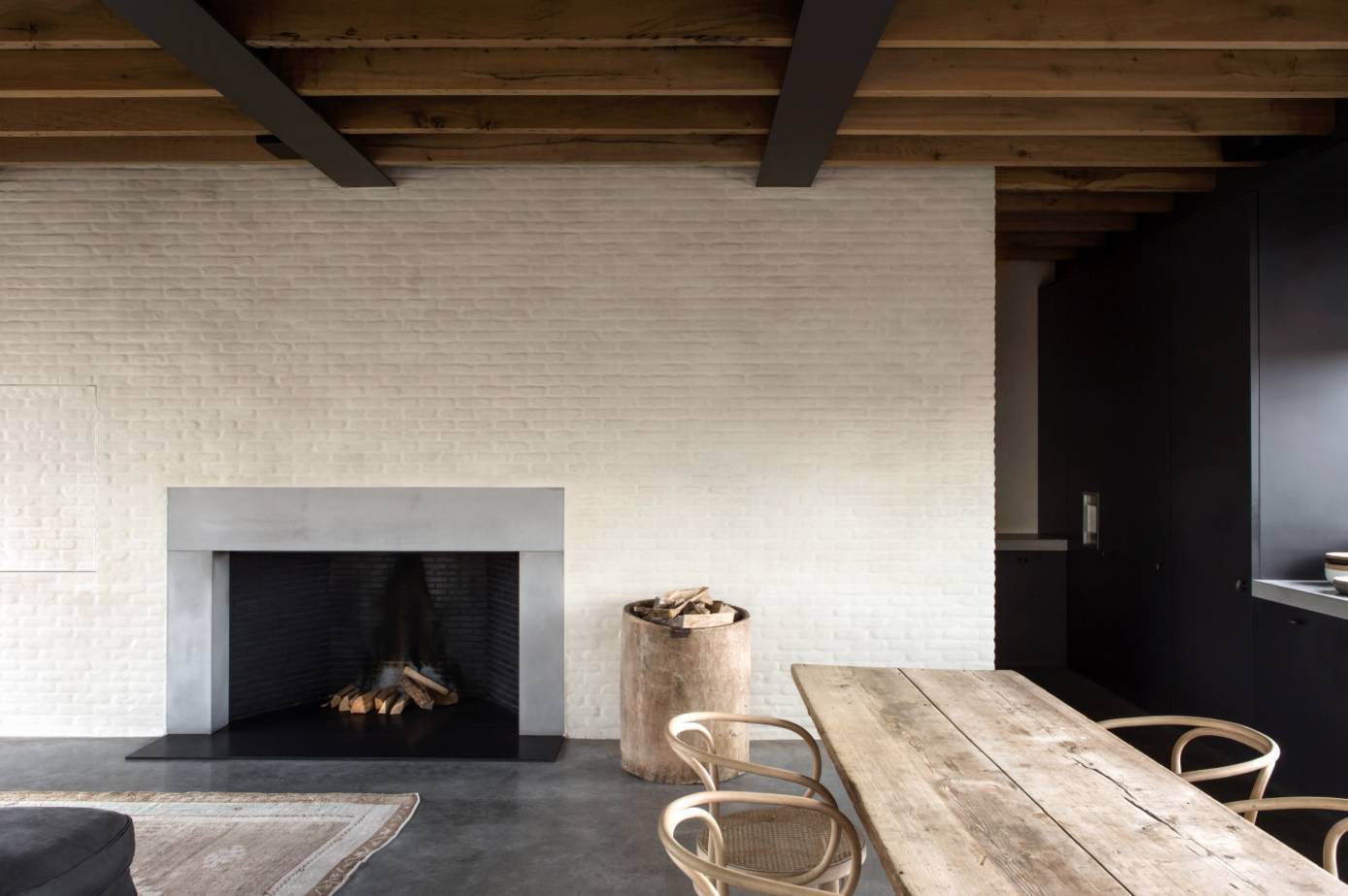 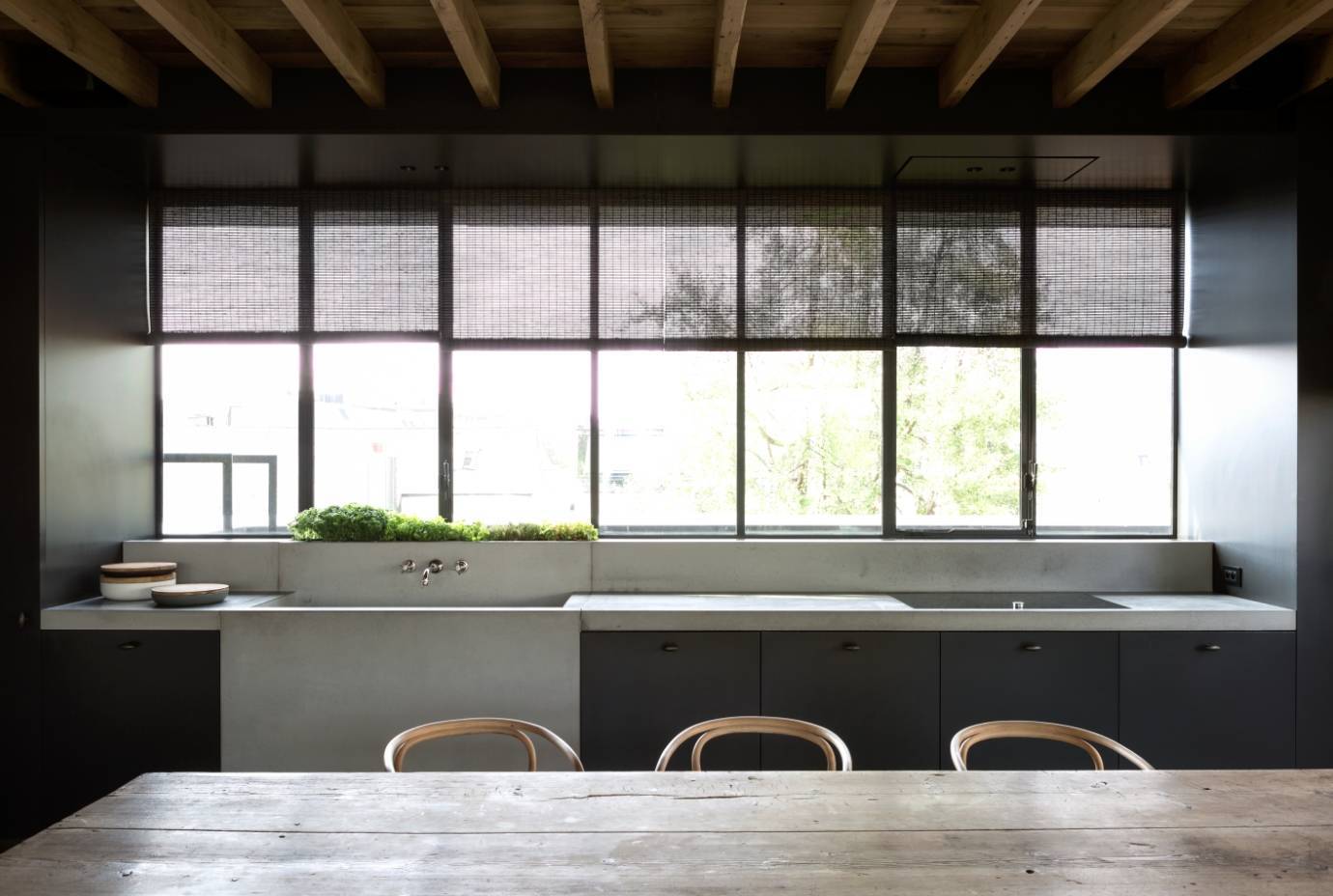 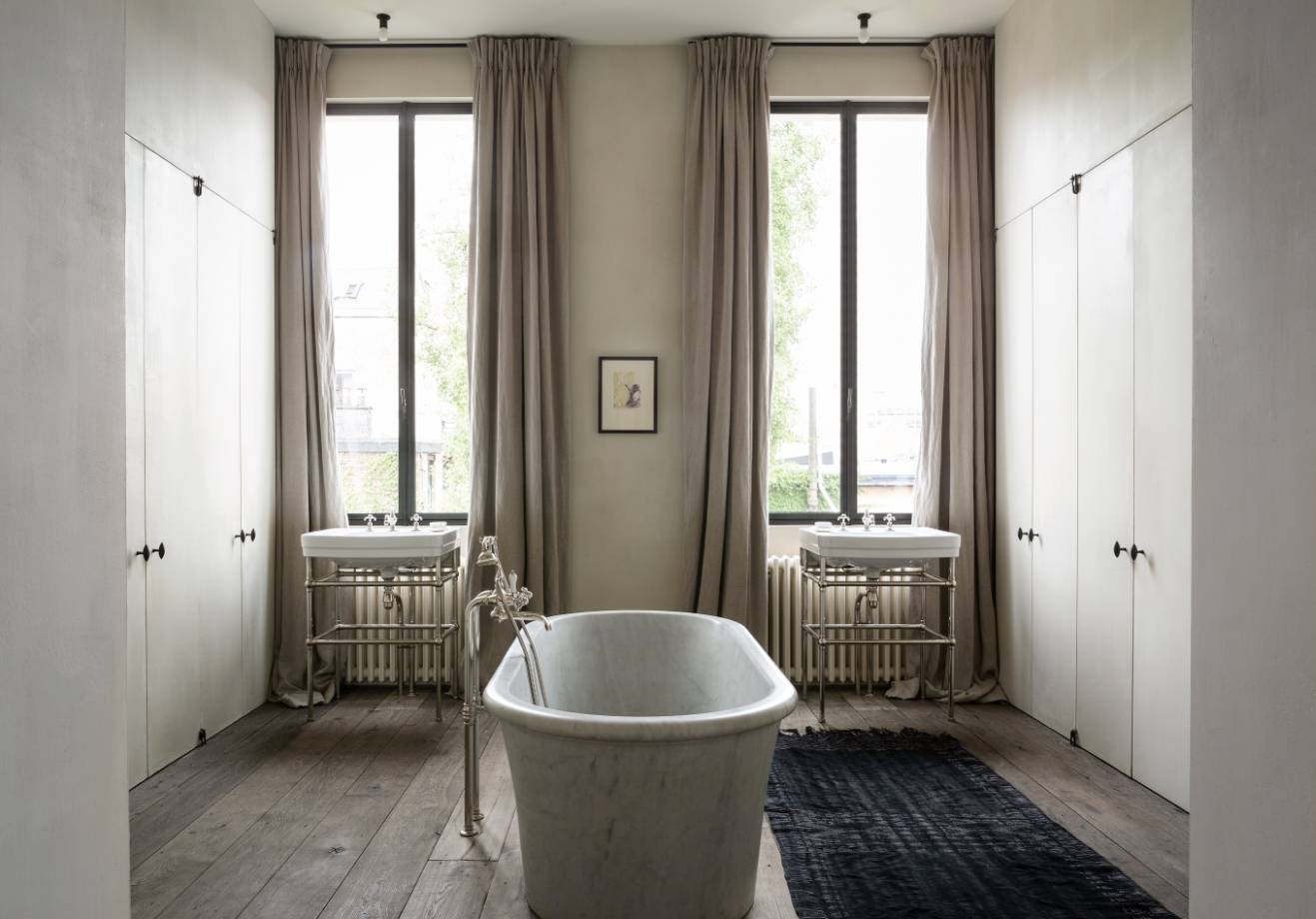 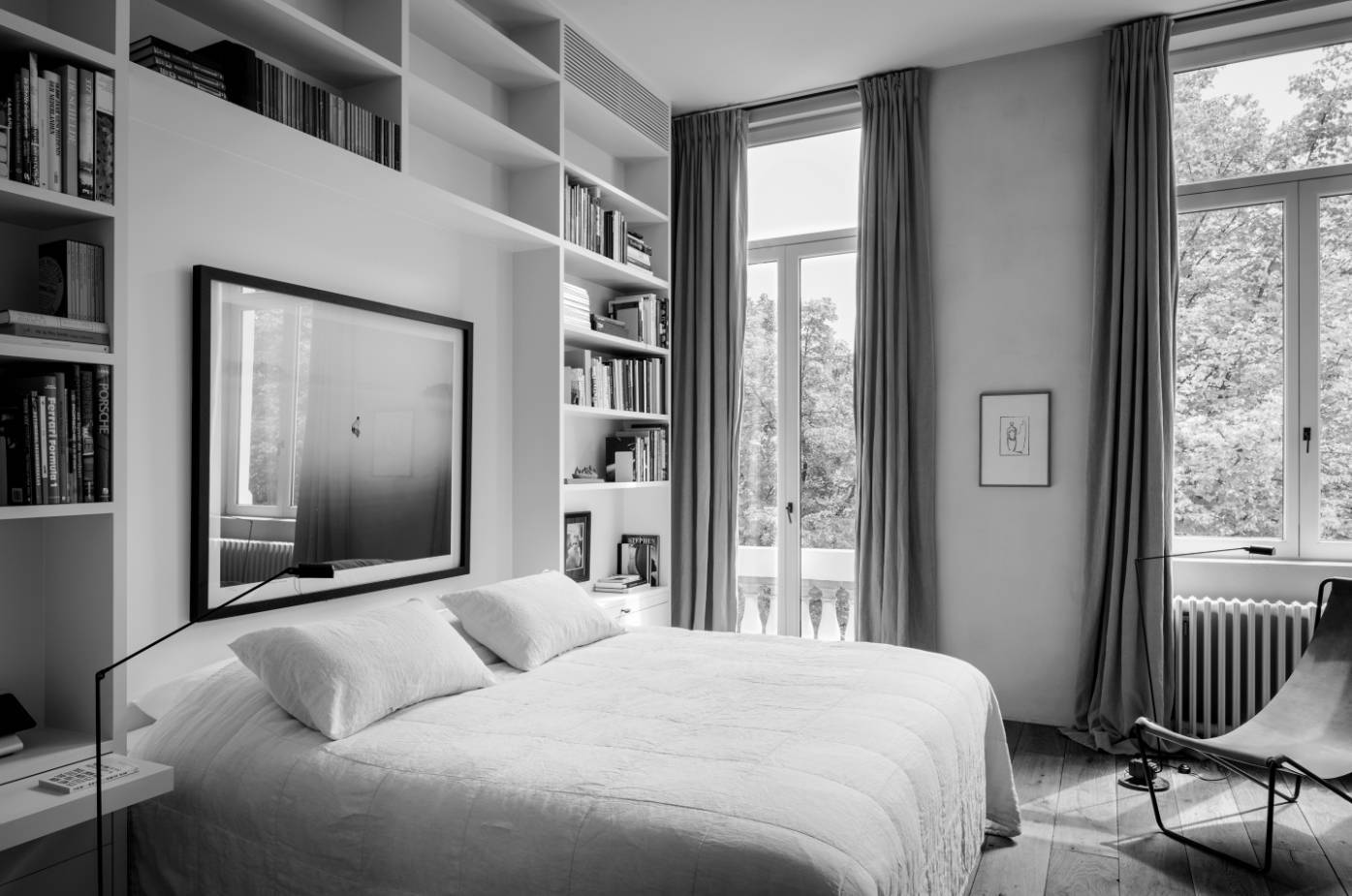 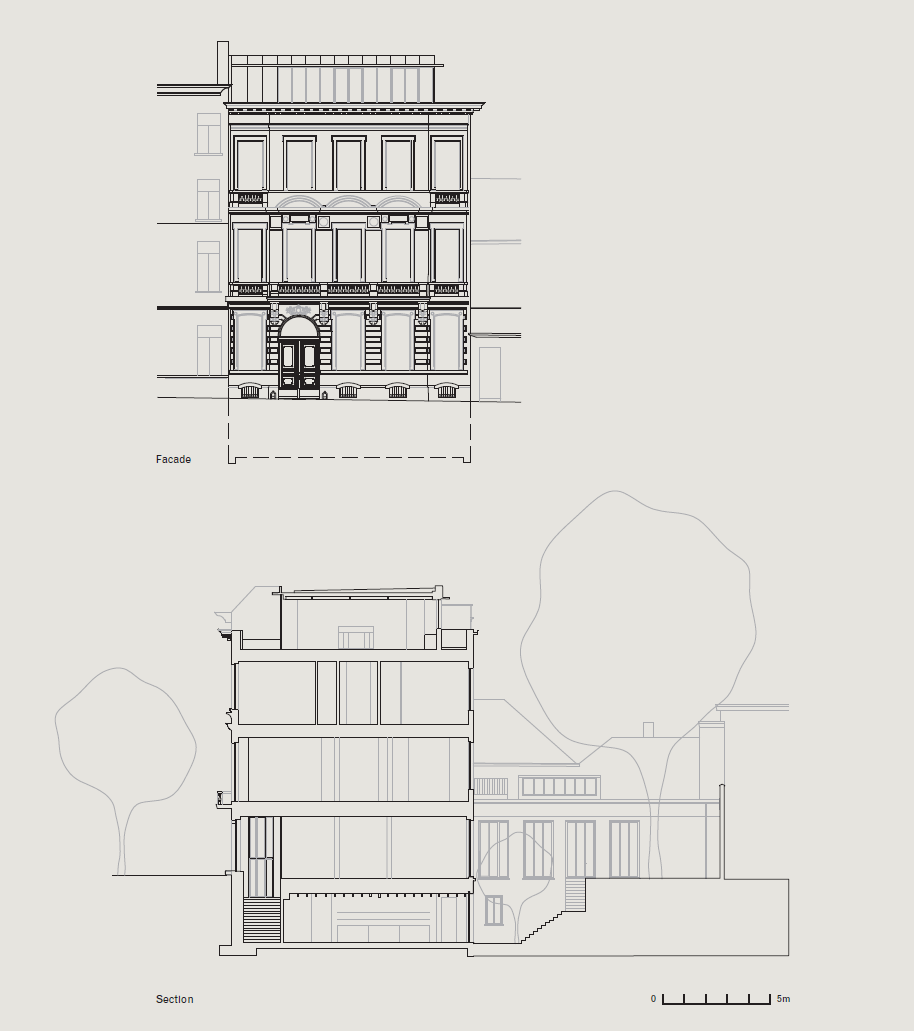